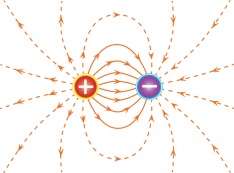 Pattern of lines of the electric field

Magnetic fields are created around an electric current (such as that flowing through high-voltage power lines). The stronger the current, the stronger the magnetic field created around it. The power of the field decreases as a square of the distance from the source of the electric current. Magnetic fields are also generated around magnetic bodies. For instance, if iron filings are scattered near a magnet, they will align themselves according to the field lines of the magnet. The magnetic field is measured in units of Amperes per meter (A/m) or millie gauss units (mG) or Tesla (T).

Pattern of lines of a magnetic field